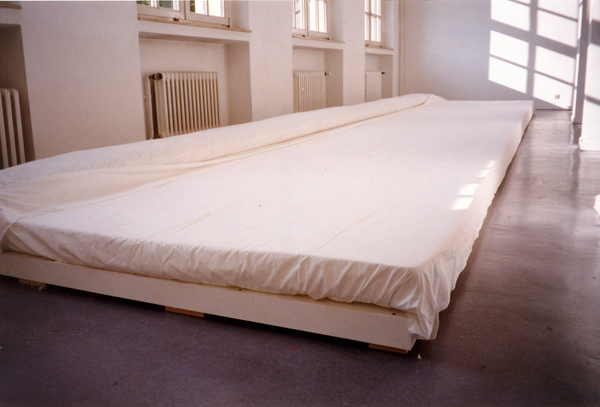 Marco Scotini Unfortunately, for me Sehenswürdigkeiten was a missed opportunity, though only partially, perhaps. Since I had to leave for Berlin I didn’t get to stay and sleep on the oversized bed you built for the Essen Kunsthaus. As I was leaving the gallery, though, two young people asked me it what they’d read in the local newspaper was true: they wanted to go up there and spend the night. I think that guy and that girl understood the nature of the operation perfectly, better than others. The fact that there wasn’t much to see was compensated by a certain form of environmental availability, by the possibility of “finding shelter”, by a series of functions waiting to be used. The two were certainly not from the art scene, they came there the way they would go to a kneipe for a drink, or a Subsonica concert. 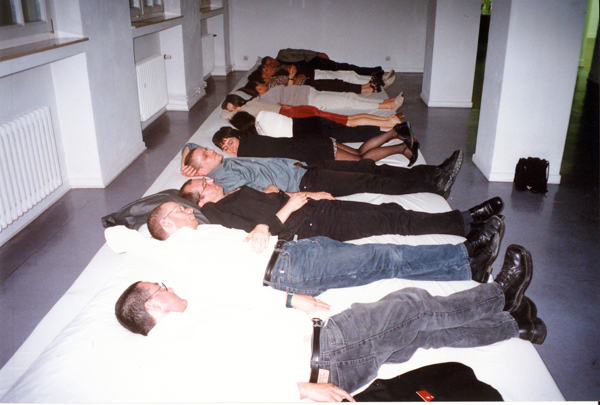 Stefano Boccalini In this case I wanted to make people inhabit three spaces. A common dining-environment, on the one hand, and a dormitory on the other, and in the middle – with white noise – a space of isolation and concentration, or more precisely a possibility of collecting one’s thoughts with respect to the outside. The bed was very large and could even contain fifteen people. It was a real bed with a large mattress, a sheet ten meters long, and a single pillow. So this wasn’t just a simple transposition from private to public. The domestic environment was altered. The functions taken out of the private sphere shifted into a collective character: not like hotel rooms, not like restaurant tables. You could enter, during the three days, all night long, so you could sleep but you could also see people sleeping, at any time of the day or night. 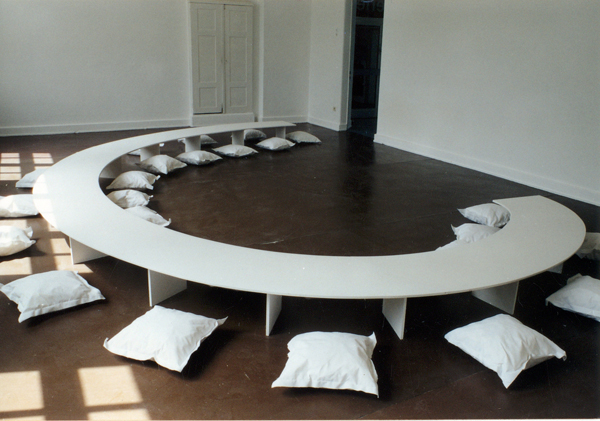 M. S. A seeing that was also participating, however, sharing a space, one or more functions: so it is a seeing made very relative with respect to other factors. Tilda Swinton who sleeps during museum hours for seven days inside a glass display case at the Serpentine Gallery – on the other hand – is still an object for the gaze, through one of a performative character. It is no coincidence that she is an actress, and thus one of the primary subjects for that figure we identify with the name of the spectator. Instead, the work of many new artists, precisely in this period, a passage is made from the role of the spectator to that of the interacting counterpart. We reach a conception in which the other is no longer someone in front of something, but someone with respect to whom an attempt is made to remove any type of distance: a figure of contact: a neighbor, in substance. 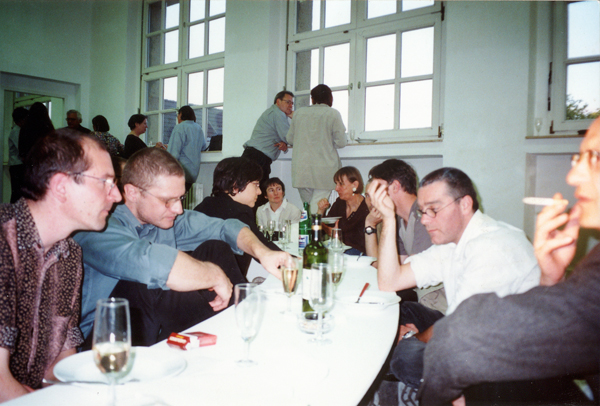 S. B. For me the other is everyone. There is no one category of people I am addressing: there are no categories, just people. Reality, for me, is accepting what is there around me, and this is a deeply political act. Because acceptance of reality, for me, is the starting point on which to build a new way of understanding social relationships, and on which to build by work. I am reminded of a video from 1995 I did with Mario Bottinelli Montandon, where the off-screen sound included a discussion between people with totally different social backgrounds: from the pastry chef to the mechanic to the economist. In the end, the environments I construct simply declare this 360° openness to the world.
From: M.Scotini e S. Boccalini “ I like Stefano and Stefano likes me” in Stefano Boccalini, Catalogo Galleria Bordoni, Milano 2001 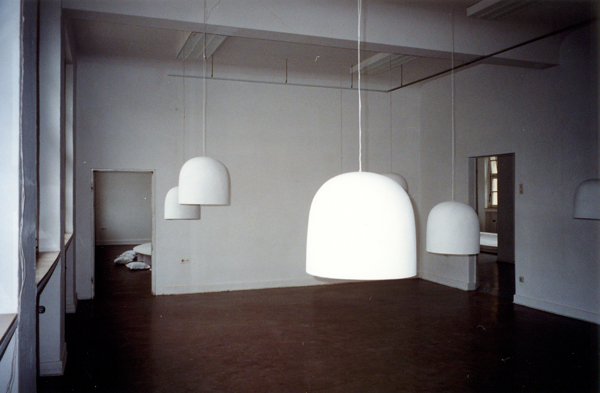